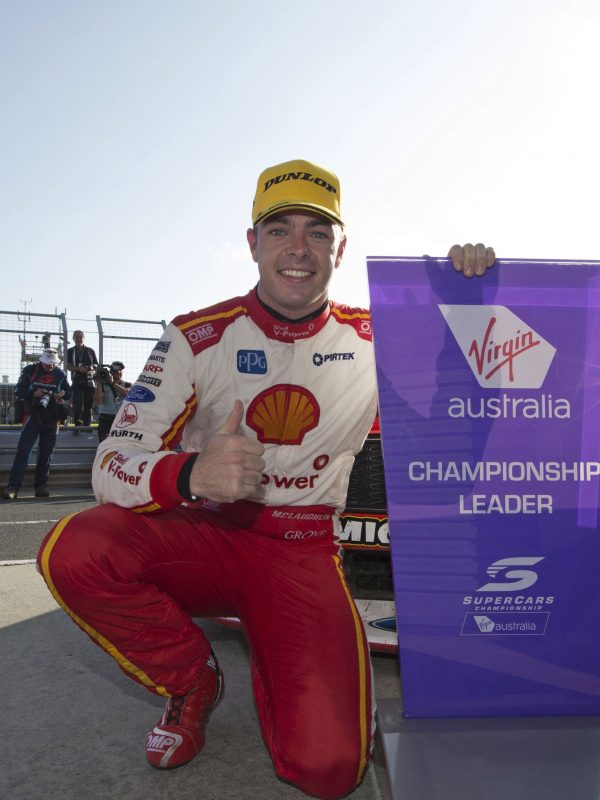 Friday practice took place in cold, overcast conditions as fog gradually lifted over the Phillip Island Grand Prix circuit in Victoria. McLaughlin experienced a tyre failure in the middle of the first session, forcing him to limp back to the garage for some minor damage repairs. He returned to the circuit with eight minutes remaining, and set the second fastest time of the session.

Coulthard and his engineers looked to tune the balance on car 12, eventually ending the session in eighth. Practice two went by with no issues for either Shell V-Power Racing Team cars. Both drivers were happy with the balance and set-up of their cars ahead of qualifying and the 250km race on Saturday.

In qualifying for race nine, both drivers took advantage of the track conditions early in the session, when a layer of rubber was still on the circuit following the Porsche Carrera Cup session. They both set their fastest laps on their second runs to take the top two positions, with Scott taking his second pole of 2018, and Fabian to set to start the race right alongside.

Unfortunately, a technical breach by car 12 due to an error when changing the rear wing angle meant that he was excluded from the session, and had to start the race from the rear of the grid.

Race nine proved to be a strong race for the Shell V-Power Racing Team. Starting from pole, McLaughlin settled into second place behind Jamie Whincup after a battle into turn one off the start. Taking their first stops at the same time, Whincup maintained a small margin on exit, where they then settled in for a 20-lap stint until the final pit stop.

McLaughlin had pace over Whincup, and managed the gap between them well. He again exited behind Whincup after the final stop, executing a pass for the lead on lap 41 to then drive away and maintain a lead of around one-second for the remainder of the race.

After being excluded from qualifying due to his breach, Coulthard made up five places during the first lap, and then proceeded to use superior pace to pass plenty of cars. He was up 10 places before his first stop, and then good stops and that continuing pace meant that he could drive through to 13th, a sensational result after starting the race from the rear of the grid.

Qualifying was good for both cars on Sunday morning with McLaughlin setting the fastest time on his second run, before again improving to be the only driver in the 1m29s bracket for the session. Coulthard went third fastest, and was up in the first sector on his final lap before some brake locking hampered his final effort. It was McLaughlin’s fourth pole of the year, and his sixth in a row at Phillip Island.

Both drivers had a solid start for race 10, with McLaughlin maintaining the lead from pole position and Fabian kept his third place over the opening laps. Fabian took his first pit stop on lap seven as a broken Walkinshaw Andretti United car triggered a safety car, and rejoined in P5.

Scott took his stop one lap later, and rejoined in P4, one position in front of Fabian. Scott made his second stop on lap 28, and took to the track to run qualifying-style laps in search of the undercut. Reynolds rejoined after his stop just in front, but Scott pushed hard for three laps and passed him at turn two – the same spot he claimed the lead from Whincup on Saturday.

Fabian took his final stop with 25 laps remaining, and slotted into fourth position behind Rick Kelly’s Nissan. The race then became a tyre economy run, as the high-degradation surface is extremely abrasive on the soft Dunlop rubber. Coulthard bridged a four-second gap to Kelly, driving up to the back of him. While he closed the gap to less than half a second, he was unable to get past and finished fourth.

McLaughlin took his second win of the weekend and third of 2018, for a clean-sweep of poles and race wins at the Phillip Island 500 – victory in our 100th and 101st races as DJR Team Penske.

After Phillip Island, Scott leads the drivers’ championship by 60 points, with Fabian jumping into the top 10 in ninth place. The team has jumped into second in the teams’ championship, only 45 points adrift of Red Bull Racing.