McLaughlin wins at the Australian GP 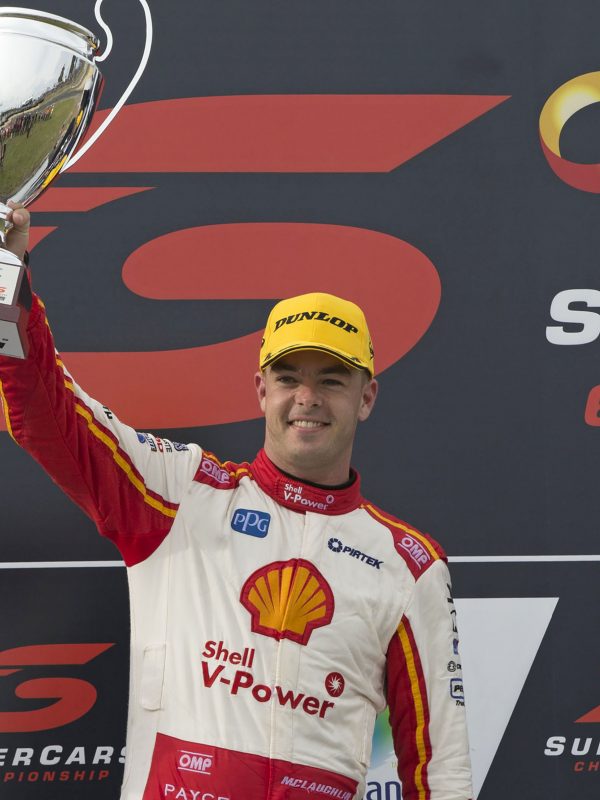 Friday practice at Symmons Plains Raceway in Tasmania was run on used tyres, tuning the cars to the circuit conditions. Coulthard and his crew looked to rectify some initial braking issues, overcoming them to set the fastest time of the session, with six minutes left. It was only eclipsed by two drivers very late, to make Fabian third.

McLaughlin worked on curing oversteer, which after some changes became understeer late in the session. The times around the 2.4km (1.4 mile) circuit are always tight, with one-second covering all 26 runners. McLaughlin in 9th was only three-tenths off the top time.

Practice two felt like a qualifying session, with a place in the top 10 guaranteeing immediate graduation to qualifying two on Saturday. The goal for this session was for both cars to be inside that top 10, which was achieved mid-session, when both Scott and Fabian improved on the existing practice lap record to take first and second spots. Later in the session several cars improved, putting Scott 4th and Fabian 6th. As a result, they skipped Q1 and went straight to Q2.

Any race around the bullring that is Symmons Plains Raceway is entertaining, and Saturday’s 50-lap, 120km affair was no exception. Scott started from third, with Fabian 11th on the grid. A solid start saw Scott slot into P4, with the Holdens of Van Gisbergen, Whincup and Lowndes in front. He maintained that position until his first pit stop on lap six, responding to Van Gisbergen who stopped one lap earlier. A good stop, and solid strategy call to take two right side tyres only saw him come out alongside the Red Bull Racing car. A battle down into the hairpin had them bumping doors, until Scott had to yield and slot in behind.

Unfortunately, Scott started to be affected by an issue with the gear shift – an electrical issue that stopped his shift-cut working properly. This slowed his progress, and he started to slide down the order. He pushed as hard as he was able to, and managed to salvage a ninth place finish.

Coulthard on the other hand had pace to burn, and mounted a stellar recovery drive from his 11th place starting point. He got a strong start and took P10 on lap one, moving up the order slowly until his first stop. He also took two right side tyres, and jumped several runners to be in an effective seventh place. He then used his pace to clear Scott and Van Gisbergen to get himself up into fifth place.

Sunday’s 200km, 84-lap race eight started well for Shell V-Power Racing Team, with Scott McLaughlin from fourth on the grid and Fabian Coulthard from sixth. Good starts from both drivers saw them hold position through to their first stops. A quick stop saw McLaughlin leap the field to take the lead, fighting with Lowndes. Lowndes got by Scott to re-take the lead on lap 29, and they held those positions until their second stops.

Scott pitted two laps earlier than Whincup and Lowndes, and raced them as they exited pit lane. He split the Red Bull Racing pair, and then held that position through to the race finish to take a strong podium against the tide of the weekend.

Coulthard raced well again, gaining positions to be third until his first pit stop. He returned to the track and continued with strong pace, however he communicated that there was a strange feeling in the rear of the car. It proved to be a loose wheel nut, which failed on lap 41. Fabian returned to the lane, took four tyres and fuel to the finish but lost a lap in the process. He battled hard to end the race in P17 after making several passes in the closing stages.

Scott is now second in the points, only 11 behind leader Whincup, with Fabian in 11th. The team is third in the teams’ championship points.