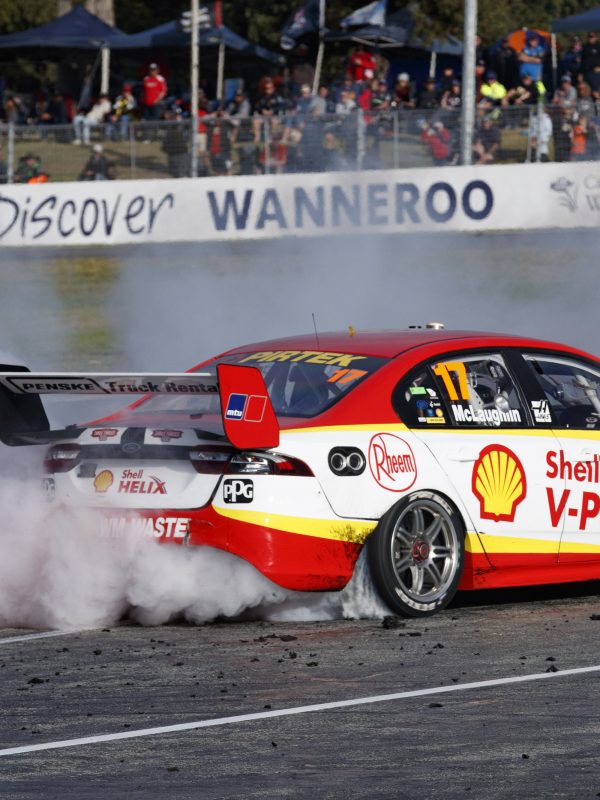 The annual trip west for the Virgin Australia Supercars Championship always bring entertaining racing around the bullring that is Barbagallo Raceway, 50km north of Perth.

The track is only 2.4km long, with seven corners that make it appear to be simple on paper but nothing could be further from the truth. The surface is abrasive like coarse, gritty sandpaper, tearing at the surface of the tyres as they strain to apply nearly 650 horsepower to the road. Car set-up is key at this racetrack.

Friday practice was spent tuning the cars for both race and qualifying pace. With the new-for-2018 three-part qualifying session featuring in Perth, finishing inside the top 10 during practice was important, allowing drivers to skip the opening 10-minute qualifying session, and giving engineers an additional set of tyres with which to vary the strategy.

Scott McLaughlin ended the day at the top of the timesheets thanks to a blistering lap that saw him drop down into the 54-second bracket, with Fabian Coulthard flying in third only one-tenth behind.
Saturday brought an extra practice session before qualifying. Both Shell V-Power Racing Team drivers skipped the opening 10-minute Q1 session thanks to their practice results the previous day, and rolled out into Q2. Both Scott and Fabian ran in the 10 and progressed to Q3.

The final 10-minute session rolled out with McLaughlin putting down an immediate ‘banker’ lap, before using another set of tyres on a later run. He went fastest on his final lap, to take his fifth pole position of 2018. Coulthard sat in pit lane until the final few minutes of the last session, before rolling out to take a strong third place qualifying position, only 8/100ths behind his teammate.

The race started with plenty of promise with both off to a good start: Scott leading and Fabian taking second position at turn one. Scott took his stop on lap 20 and then settled in to run the final 30 laps to the flag.

It was all about tyre management on the rough Barbagallo surface, managing the gap to those behind. Some runners took tyres late in the race, with fellow podium getters Mark Winterbottom and Shane van Gisbergen the last cars to stop, before driving through the field using their fresher tyres. Coulthard sat strong in second position until his first stop on lap 21. Unfortunately an issue in the pit stop lost Fabian more than five seconds, putting him back into the pack. He made up a few positions, however his tyre performance tapered off later in the race and he was passed by faster cars on fresher tyres to eventually finish ninth.

Sunday brought some challenges, with a poor qualifying session seeing both Scott McLaughlin and Fabian Coulthard knocked out in the opening Q1 phase, with Coulthard finishing qualifying in 17th and McLaughlin 19th.

Incredibly, McLaughlin mounted a stellar comeback drive to take an against-all-odds victory! He had a great start, gaining several positions on the opening lap, elevating himself to 12th before a lap five safety car triggered a full-field entry to the pit lane. It worked well for McLaughlin, gaining several more positions, exiting in seventh. Through the second stint he used strong car pace to continue his push to the front. It ended up being a three-stop race, with the combination of speed and good strategy resulting in McLaughlin take his fourth win in a row in 2018.

Coulthard also had a good start, however he was caught up in an incident at turn four on lap one that dropped him to 24th. He was then forced to stack in pit lane behind McLaughlin at the first stop, which pushed him into the battle pack where he again got caught up in trouble. This time it was Lowndes who pushed him off the road and back to 23rd. Coulthard then had some tyre issues that hampered his pace, which caused another off-road excursion on lap 29. Also using a three-stop strategy, he ended the race in 16th after driving back through from the rear more than once.