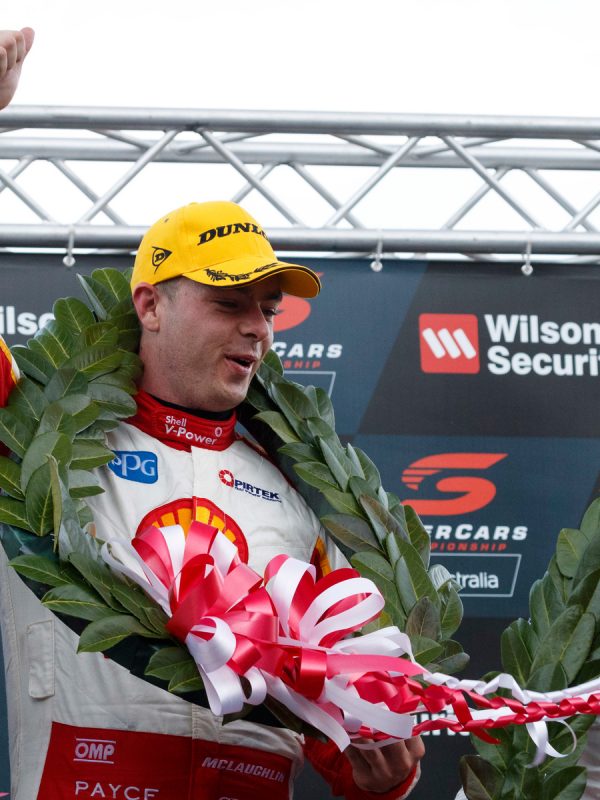 During the Wilson Security Sandown 500, in Melbourne, Australia, September 17, 2017.

With a podium finish in the Sandown 500 on the weekend, DJR Team Penske had another successful race event.

The Sandown 500 opened on Friday with practice in very wet conditions. The co-drivers Premat and D’Alberto did the majority of the running, with both practice sessions 1 and 3 for co-drivers only.

Practice 1 started dry, before the rain came down hard. It then stayed for the rest of the day. Coulthard and McLaughlin drove in practice 2 when the weather got even worse. An unfortunate slide for Coulthard late in the session saw him contact the turn 7 tyre wall, damaging the car. The crew did an incredible job, repairing the car in quick time, with D’Alberto then able to set the fastest time in the wet at the end of practice 3.

Saturday at Sandown sees teams compete for pole position in a unique format that is only seen once a year. The day started with final practice, before a traditional qualifying session where Scott grabbed second and Fabian fifth. Alex and Tony then took on the 20-lap race for the grid 1, starting from those qualifying positions. Both guys did a great job with Alex finishing second and Tony seventh.

Scott and Fabian then took control in race for the grid 2 which ultimately decided the starting grid for the Sandown 500 on Sunday. Again, good racing and smart driving saw Scott finish second and Fabian fifth – their grid positions for the next day.

Sunday was pay-day and in the opening race of the PIRTEK Enduro Cup, Fabian Coulthard and Tony D’Alberto drove smart to assist in building the team’s championship lead. In a red-flag shortened race both drivers worked hard with engineer Phil Keed to find a balance they were happy with. With championship rivals battling, staying out of trouble was key. Running fourth for much of the race, they were hampered by back markers late in the race. Ignoring blue flags, they caused Coulthard to lose time, so he finished fifth. Coulthard remains third in the championship, 161 points behind leader McLaughlin.

“Fifth is definitely not a bad result. It could have been better, but we just didn’t get on top of it all weekend,” said Coulthard.

“It was a pretty lonely race, I was on my own for much of it. The boys worked really hard, the pit stops and strategy were great and we did the best we could today.”

“It was a solid result. We worked really hard this weekend, but it definitely didn’t go all our way. Fifth is a good result after all that, and now we head to Bathurst,” said D’Alberto.

Scott McLaughlin and Alex Prémat worked hard all across the weekend to continue the strong pace that car no.17 has shown across the 2017 championship to date. Starting the Sandown 500 from second, both Prémat and McLaughlin shadowed the PRA Falcon of Waters/Stanaway for much of the shortened race. Prémat did a very strong job, maintaining position throughout his stint. McLaughlin then worked his way back to the front, looking after the car and tyres until he attacked over the final laps. It was not quite enough, and the pair finished second. With his rivals faltering, he has extended his championship lead to 84 points, with the teams’ championship lead extended to 378 points.

“It was an awesome day. If you’d told me at the start of the year that we’d be on the podium at the Sandown 500, I’d have thought you were kidding,” said McLaughlin.

“We came here this weekend with the goal of finishing in front of our championship rival, and we did that. Alex was fantastic all weekend. Next up is the best race week of the year.”

Alex Premat said that he was feeling good, and proud of the result.
“This is like a copy and paste of last year! It is always a challenge to win big races, and now the next goal is Bathurst. We wanted to score points, this is what we did and it is the best thing for Scott’s championship.”

DJR Team Penske’s next race is the Bathurst 1000, across the weekend of October 5-8.