On the podium at Mt Panorama’ 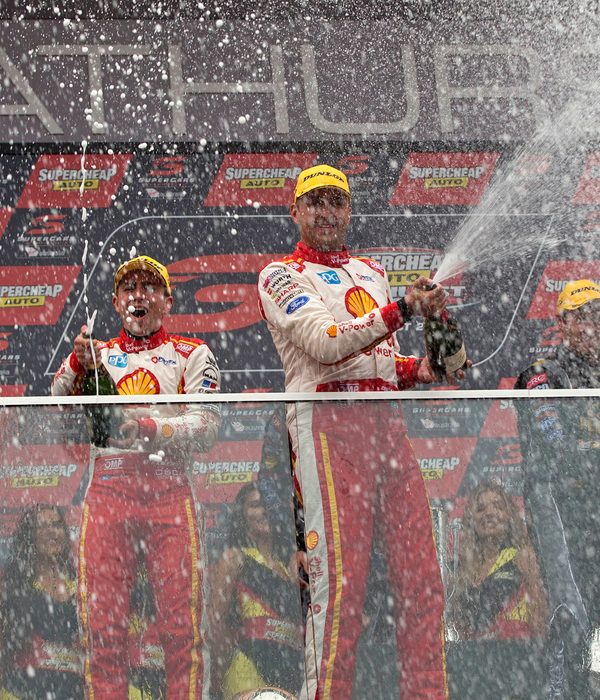 The biggest motorsport event of the year didn’t disappoint with Bathurst delivering the highs and lows we’ve come to expect from the mountain.

On Saturday, Scott McLaughlin smashed the lap record at Mt Panorama during the Top 10 Shootout. Scott has been deemed the ‘King of Qualifying’ throughout 2017, having taken 13 poles up until the start of this weekend. His one-lap pace is renowned, and all eyes were on him as he lined up for the Top 10 Shootout. Having provisionally qualified first, he was the final car to head out on the Mt Panorama circuit for his single-lap dash. He was fastest to the first sector, before making a minor error to run wide through McPhillamy Park at the top of the mountain. Despite the error, he went further in front to the second sector before flying down the mountain to record the first ever lap time in the ‘threes’ in a supercar around the Bathurst track: 2m03.831s.

Sunday was a tough day for Scott McLaughlin after the high of the previous day, delivering a DNF for the car 17 crew. Scott McLaughlin started in the No. 17 Shell V-Power Ford, and held the lead across the opening lap, before making a minor error at turn 1 on lap 2 in the extremely slippery conditions to drop back to sixth. He then settled in for a long race, before handing the car to Alex Premat on lap 25.

An engine issue began to appear in car 17 around lap 45, which the team believed initially to be an electrical problem. A recycle of the power was attempted to rectify the issue, and then a new map was loaded into the ECU at a pit stop. Unfortunately, the problem proved to be terminal, with car 17 coming to a stop on track on lap 75, with Scott and Alex marked a DNF.

Fabian Coulthard and Tony D’Alberto’s day started from 7th on the grid, with Coulthard driving the first stint in extremely wet conditions. It was tough going, with car 12 offering massive understeer on the extremely damp track. Fabian drove as well as he could, keeping the car straight until he handed over to Tony on lap 15. The rain varied across the opening 100-odd laps, before a dry line began to appear and the change to slicks was made. Fabian was back in the car to run to the flag on lap 105 as the track began to dry. They both struggled with balance in the wet, but as the track continued to dry the car improved and the pace came. As others made errors, Fabian kept the car on the track and was able to capitalise to take his first Bathurst podium.

Fabian Coulthard has regained the championship points lead, with Scott dropping to third position. The team continues to lead overall in the teams’ points, 328 in front of Triple Eight.