McLaughlin on a high up north 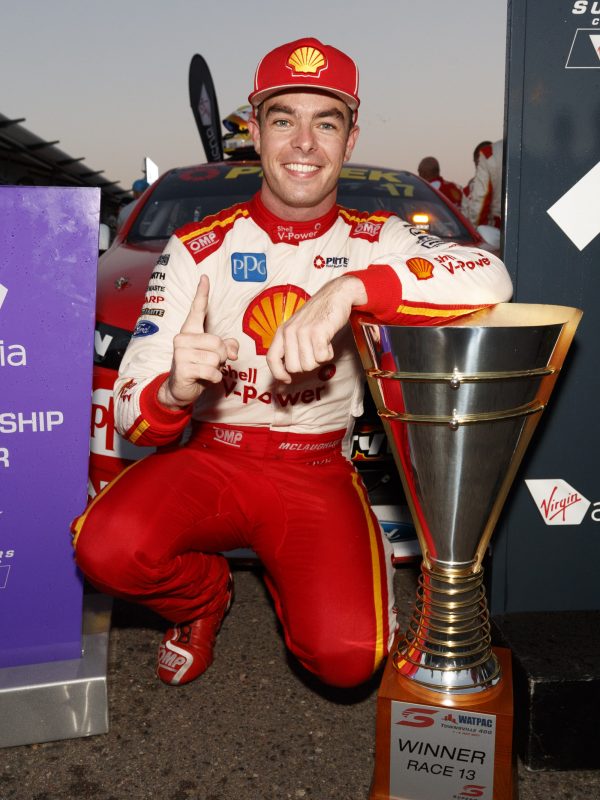 The Townsville 400 presented an up and down weekend for DJR Team Penske, with sensational results for Scott McLaughlin, whilst Fabian Coulthard endured a more difficult weekend.

McLaughlin was fast from the opening session, working on race pace and initial chassis set-up through Practice 1, before switching to a qualifying focus in Practice 2. He made a small error on his fastest lap late in the second session, ending the day second on the timesheets, only one and a half tenths off the fastest time of the day.

He continued his run of dominant qualifying pace on Saturday, taking his eighth pole of 2017 with a new lap record, over two-tenths of a second faster than the rest of the field. In Saturday’s opening 200km race, he lost the lead off the start but quickly regained it by passing Jamie Whincup on lap two, then gapping the field to maintain the lead for the length of the race. It was an emphatic win that elevated McLaughlin to the Championship points leader for the first time in his career.

McLaughlin was dominant in qualifying again on Sunday, setting a stunning lap record time – the first driver into the 1m11s bracket in Townsville – in the top 10 shootout to claim yet another pole position. In the race, he maintained the lead until the first round of pit stops when he took more fuel than Whincup, and a 2s gap opened across most of the next stint. Whincup was then able to maintain the lead after the second round of stops.

McLaughlin pushed hard and, despite the combined handicap of a cool suit failure and 60-plus degree cabin temps, finished only 1.4s behind Whincup for a solid second place at the end of the 200km affair. He departed Townsville as the Championship leader.

“It’s fantastic for the guys at Shell V-Power Racing, I had a great battle with Jamie Whincup all weekend. It’s very cool to take the Championship lead. We’ve still got a long way to go, though. We came here hoping to get a couple of podiums and maintain out place in the Championship, and we’ve done more than that, so I couldn’t be happier,” said McLaughlin.

Fabian Coulthard spent Friday working through a program to find a comfortable balance in the No.12 Shell V-Power Ford. His engineering team made several changes to the car across the 80-minutes of practice, however Coulthard wasn’t 100% happy with the balance of the car at day’s end.

Coulthard and his crew then worked hard overnight to find a handling balance to suit around the Townsville street circuit. He qualified 9th on Saturday, and started the race well before being hit from behind and spun at turn one on lap one. He dropped to the back of the pack, but then mounted a stellar recovery drive, combined with good strategy, to get back to 11th at the finish and minimize the points loss.

On Sunday, Coulthard got pushed down the order off the race start after qualifying 12th. He was involved in an early race incident that saw him take a 15sec time penalty at his first stop, losing as a result. He then had to push hard from the rear of the field. He got the lap back, only to lose it again at his second pit stop. He got to p21 at the end of the race, and now sits third in the championship.

“It’s been a weekend to forget, that’s for sure. We tried our hardest to get on top of the car, but we just couldn’t manage it. Great weekend for Scott, a dream run. Work to do on our side of the garage, but we’ll look to come back stronger at the next race. I’ve been in far worse positions than this previously, so we’ll bounce back,” said Coulthard.

The Shell V-Power Racing Team will next hit the circuit at the Coates Hire Ipswich SuperSprint across the weekend of July 28-30.