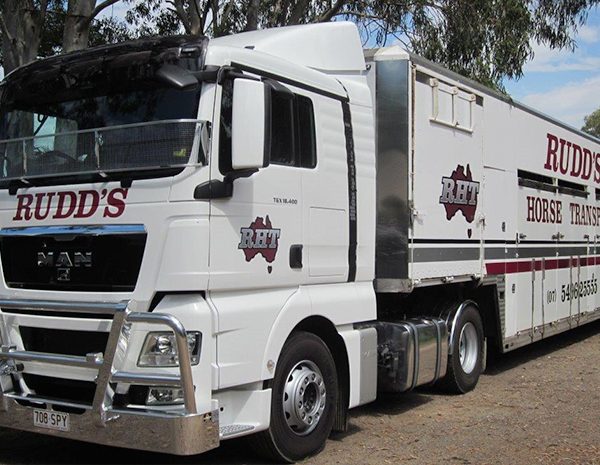 Rudd’s Horse Transport, located in Brisbane, QLD has been involved in the specialised area of horse transport for the last 22 years.

Owned and managed by Les Rudd, the company has steadily expanded to the extent that they now operate a fleet of 10 trucks. Les grew up around horses as a kid so it was no surprise that he ended up having a close association with them.

The company transports race and show horses throughout the country with its main weekly service runs being Cairns - Melbourne and Mt Isa - Darwin.

When the need arose for Les to purchase some new trucks earlier this year Les had three important features on his shopping list; fuel economy, comfort and warranty. As Les tells it, he had always liked MANs but felt he couldn’t afford them.

But through persistence and hard work, and some keen pricing, Brisbane Truck Centre sales rep Sam Cox cemented a deal with Les for his first TGX 18.400 prime mover – and from that Les now has his fourth MAN scheduled for delivery in a few weeks

To state that Les is happy with his MANs is something of an understatement. “I’m more than happy with the way the MAN’s are performing. The first truck has done close to 100,000 kms and we haven’t so much had to touch anything on it – it’s been so good,” said Les.

“There’s just no comparison when you drive an MAN – it’s far superior to other trucks on the market. My drivers tell me that even after spending 11 or 12 hours in the truck they reckon it’s like they’ve been lying on a lounge chair all day – they’re that comfortable and quiet and the 12 speed TipMatic makes driving so relaxing,” Les went on to say.

“And as for fuel efficiency, they’re simply out of this world. The rigid truck we are running is returning up to 4.1km per litre and the prime movers are averaging 3.4km per litre  – that’s simply phenomenal,” Les went on to say.

“Other trucks we’ve had on the fleet were only achieving 2.2km per litre, so the cost savings are substantial. We’re saving $4,000 per month on fuel on just one truck alone!” Les said.

“The other major benefit of the MANs is their 60,000km service intervals, which will translate into even lower whole-of-life ownership costs,” said Les.

“In a nutshell, I’m absolutely stoked with my MANs,” Les added.