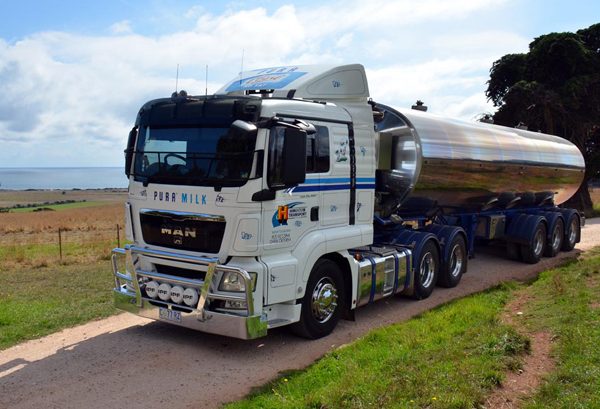 The roads might be narrow, windy and steep traversing picture postcard scenery, yet nestled along these hillsides of Northern Tasmania is a thriving agricultural industry and a tenacious MAN TGS 26.480 delivering more than merely new productivity gains.

Like their grandfather and father before them Marcus Hingston and his brother Nicholas are transport operators. Understandably the business has grown considerably in six decades and now includes the haulage of milk, livestock and general transport services to the agriculture industry.

Their grandfather Viv started the business carting livestock with a Desoto tray truck back in 1947. Yet it wasn’t till the early eighties, when their father Kerry purchased a second hand log truck that European marques entered the fleet. So impressed were they with the performance and reliability of that second hand truck, along with the service they received from the local dealer, European trucks became the backbone of their operation.

The diversification and growth of their business into all areas of the agricultural industry is attributed to the prompt and reliable service they provide their clients, which incidentally takes them as far as Hobart in the south of the state. Along with a diverse range of trailers, and the MAN TGS 26.480 there are nine trucks in the fleet.

This is the third MAN in Hingston’s fleet and like the other MANs before has given trouble free running right from the start. The Hingston brothers concede not only has the  performance of their MANs surprised them but also their exceptional reliability and economy gains are attributes that have not gone unnoticed.

“Because these later specked engines have greater torque we’ve opted around the 500 HP mostly to save fuel and even though it is early days the new 480HP is returning very pleasing results in both performance and economy,” Marcus revealed.

“This MAN engine is really well suited to our environment here in Tasmania,” Marcus informed. “In order to achieve good economy you need to be able to get the truck to cruising speed as quickly as possible, the MAN engine is very good at achieving this.  Because the terrain in Tasmania is very undulating we require large torque across a broad range of revs, which makes maintaining cruising speed a lot easier on the truck with minimal gear changes. Torque in the TGS 26.480 peaks at around 1000 revs and remains usefully high all the way to 1300 revs,” Marcus added.

Essentially the MAN TGS 26.480 is a real all-rounder with its 68,000kg rating, and while some sceptics may argue that there might not be enough grunt in the 13-litre 480 horsepower MAN engine to haul B-doubles, there are operators like Marcus Hingston who are quick to ask how much power and how fast do you need to go?

The heart of these MAN TGS 26.480 8x8 is the MAN 6-cylinder 4-valve in-line engine, with Common Rail injection, turbocharging and intercooling. These engines feature EDC electronic engine regulation and meet future EURO 5 emission standard with OBD2 (onboard diagnosis) and NOx-control and have SCR catalytic converter with Adblue injection.

The MAN Engine Valve Brake (EVB) is fitted as standard.

Getting the power through the ground is task given to the MAN 12 speed TipMatic (ZF AStronic) gearbox that is an automated constant-mesh gearbox. It features 12 forward speeds and two reverse ratios. It is suitable for gross train weights up to 70T (occasionally up to 90T+GTW upon application).

With MAN’s TipMatic, shifting and clutching are electropneumatic - there is no clutch pedal. Normal mode is automated with manual mode available and shifting is via a fingertip lever.  It can be driven with the PTO engaged only in second and fourth gears. The ‘M’ setting is for precise low-speed manoevering in forward & reverse.

Another feature that Marcus has high praise for is the MAN EVBec with ZF gearbox intarder and downhill speed controller.

“With MAN’s retarding system it can be used manually by the driver to control the speed of the truck also it can be set to operate automatically, according to the requirements at the time,” Marcus explained. “For example, in the fully automatic mode, you simply make a quick dab on the brake pedal which engages ‘downhill speed control’. This means that the exhaust brake is operated automatically whenever needed, in conjunction with the retarder system, to control the vehicle’s speed.

“Alternatively you can use the retarder manually simply by moving the retarder wand into the position you require. There are five positions from mild through to maximum. The operator’s guide tells you that use of the retarder in the fully automatic mode will reduce wear on tyres and will preserve the wheel brakes in a cool, fresh condition for when they are really needed.”

“To give you an example of how we typically use the retarder,” Marcus added. “Take a traditional country road with bends and few undulations. In this instance I would use the retarder manually just to reduce the truck over running on the small descents and occasionally to shed a few revs heading into the sharper bends. On the other hand take when I’m coming down the Sideling Range heading into Scottsdale which is approximately a seven kilometre descent I use the retarder in automatic mode, which means the downhill speed is controlled entirely by the truck. This means I am descending the hill at a safe speed, yet still maintaining an efficient trip time, with minimal wear on the truck’s service braking system.”

“It’s probably worth mentioning that the MAN retarder system is extremely quiet which means we can still have full retardation coming into urban environments,” Marcus added. “And, that is extremely important here in Tasmania.”

“Another great advantage of MAN’s retarder system is the fact that it does it’s braking through the transmission, which means you can down change a gear with it still engaged and the road speed of the vehicle does not increase during the gear change. It is so effective that I can virtually bring the truck to a complete stop by using the retarder and down-changing and not have to touch the service brakes of the truck,” Marcus added.

Their 30,000 litre Byford milk tanker boasts some high-tech features as well, including a revolutionary pumping package and the inclusion of the BPW Trailer Electronic Braking System which offers the Roll Stability Program.

“We’re currently specifying our new trailers now with the EBS and BPW disc
brake technology which I believe has contributed greatly to the elimination of both avoidable accidents and roll-overs over the past five years, Marcus explained. “I’d recommend them to any operator who has any high centre of gravity or dynamic moving load issues, like the milk in our tankers, that they investigate the BPW Roll Stability Program, he added.

The Byford pumping packing and hydraulic hose reel can be remotely moved to either side of the truck which makes life far easier for drivers when the entrance to some milking vats demands such access flexibility. As the pumping gear has now been placed further forward on the tanker Byford has been able to vastly improve their pumping equipment’s flow rate.

“With the hose reel and pumping equipment mounted where it is, both our mechanics and drivers are very happy,” Marcus continued. “Firstly they have better access to the hose reel and components for quick and easy maintenance and secondly our drivers find the physical use of the hose and reel less stressful, especially when applying the automatic push button ‘hose rewind’ feature.”

Craig Bonde has the enviable task of piloting the MAN TGS 26.480 and reckons when he first started driving the older TGA 26.480 a few years ago he felt a bit guilty getting paid to drive it because of how easy and comfortable it is to operate.

Craig’s lived in the north west of Tasmania all his life and been picking up milk for the past decade and a half. When his older MAN TGA 26.480 was due to be replaced he had little hesitation requesting the newer TGS model.

Craig cites the smooth comfortable ride in the cabin along with the TGS’s road handling as some of the best attributes from a driver’s point of view. He also adds that the extended service intervals mean he gets to spend more time on the road than the drivers in other marques doing similar haulage tasks.

“The visibility out of this MAN is really terrific,” Craig explained. “The eight bag air-suspension is really smooth too, and the way the cabin is sprung means I don’t get any nasty jolts, it is a truly remarkable ride.”

Another aspect that Craig pointed out was the spacious interior with ample storage space. Furthermore under the bunk there is 600 litres of storage capacity that can be accessed through the passenger’s side door locker. The side door on the driver’s side provides a sealed compartment for oils and tools.

“The more time I’m behind the wheel the more money I earn and when you’re trying to save for a house that’s really important,” Craig added. “It (the TGS 26.480) is extremely good on fuel too. You really notice it when you’re pulled up next to other trucks at the fuel bowser and you’ve all been doing the same job.

“Our service can only be as good as the tools we use,” Marcus emphasised. “With the MAN we have an excellent product that is not only reliable but efficient to run and the back up support we have from MAN first class. When you’re on a good thing you might as well stick with it,” Marcus concludes.