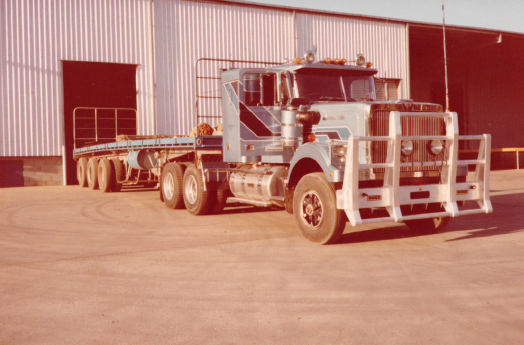 Western Star Trucks will showcase two of its most popular trucks at next week’s Brisbane Truck Show: a 4800 and a 4900.

An homage to the very first Western Star released to the Australian market which appeared at the Brisbane Truck Show in the early 80s, this year’s 4800 will feature a tribute livery with a blue cabin, red chassis, and heritage pearl white highlights. Complete with a 34” Starlight lowline roof sleeper, the 4800 is powered by a Detroit DD15 500hp (at 1,850ft-lb) engine, has an Eaton ultrashift transmission, and also features the renowned Airliner suspension.

“From the modest 34” lowline sleeper to, what we believe to be the largest bunk on the market in our 4900, the 82” sleeper, our range will not only pay homage to the past but also showcase today’s comfort features.

“As we anticipate the all-new Western Star platform reaching our shores in late 2022 or early 2023, we will continue to roll out updates to our current range giving customers further options.

“Most recently, we have partnered with FleetSafe to offer customers the ‘Mobileye’ collision avoidance solution and the ‘Spotto’ blind spot radar.

“We have already received positive feedback from customers on the back of initiatives such as these and we are further seeing this manifest as an uplift in sales and orders into next year.”

A meet and greet with the Shell V-Power Racing Team’s Will Davison and Anton De Pasquale will take place at 12.45pm on Saturday May 15th, for Supercars fans visiting the Brisbane Truck Show.

Western Star Trucks will also be displaying a 4800FS2 on Little Stanley Street (West) as part of the South Bank Truck Festival.