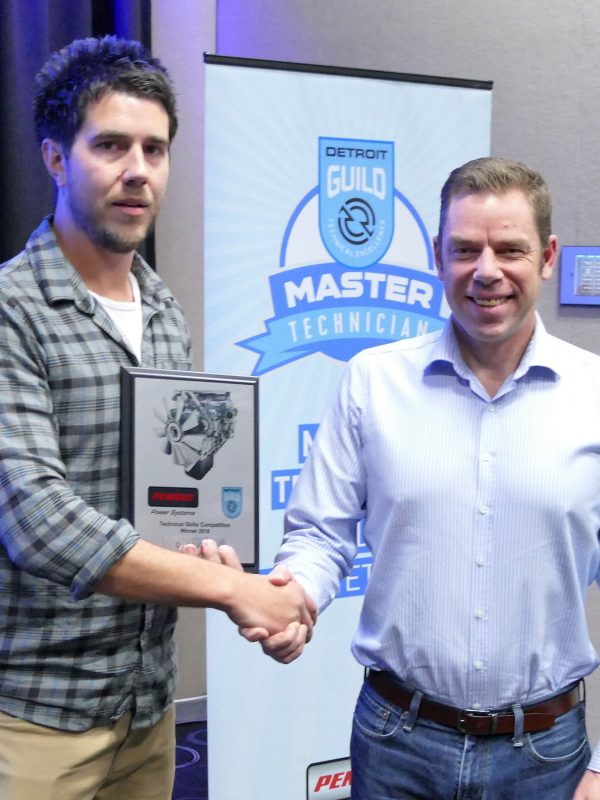 David Willis has been awarded as the 2018 Detroit Master Technician by Penske Australia.

David, a leading hand from Penske Australia Chipping Norton, narrowly outperformed five other finalists in the annual skills and diagnostics contest held in Brisbane on Friday.

Open to all Detroit Guild members, the contest saw technicians from around Australia and New Zealand compete in qualification rounds in Brisbane, Auckland, Sydney, and Perth, in a range of challenging tasks.

These tests included both general procedural tasks as well as advanced diagnostics scenarios to complete. The added pressure of racing the clock in a competition environment made the contest particularly demanding.

“This competition demonstrates to our customers the high standards that they can expect from a Penske-trained technician.

“It is no easy task to win this title. Whether it is a simple duty such as changing a gasket, or a complex electronic control issue, customers can be assured that lessons learnt by participants in the heat of the competition are directly transferred to continuously improving the quality of work performed on their valuable assets.

“The competition has evolved over the last three years to a very streamlined event. The most difficult thing about this competition is that our Detroit Guild members are of such a high standard. This makes finding tasks for them to complete all that much harder, as they gain more experience both in their workplace and from the competition itself.”

Mark Hurst, who won the inaugural competition in 2016, has since progressed from working as a technician to taking on a role as a trainer within the technical training department where he is able to pass on the skills he has acquired.

“Visiting the Detroit factory in 2016 gave me a new appreciation for the Detroit product range,” said Mark.

“It inspired me to push further in my pursuit of knowledge. The technology and manufacturing processes I saw were nothing short of awesome, and it all confirmed my view that the products we represent are truly world-class.”

As Penske Australia Master Technician, David will receive a trip to the United States to tour the world-class manufacturing facilities of Detroit and Daimler. David will also tour the Team Penske motorsport facility in North Carolina.