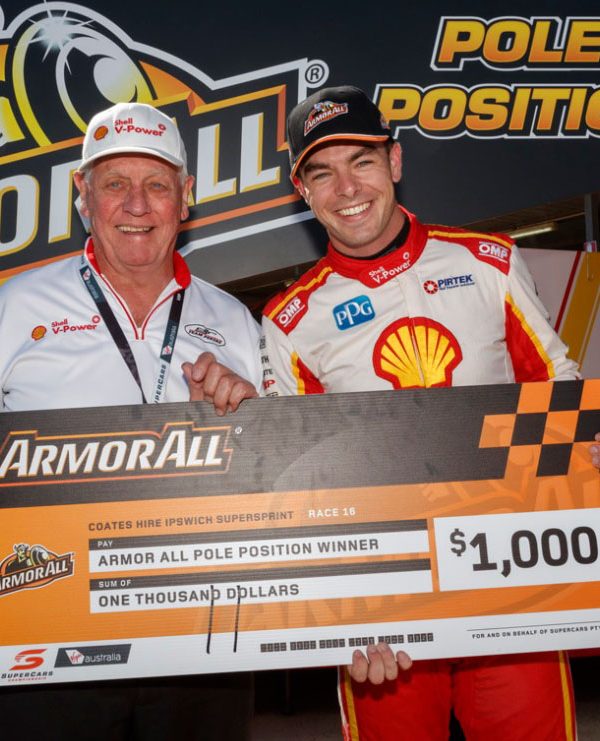 Scott McLaughlin took pole position on both Saturday and Sunday, taking his tally to 11 in 2017. In doing so, he equaled Team Owner Dick Johnson’s pole record of five in a row (set in 1988), and also joined Dick in eighth position on the all-time pole position list, with 28 career pole positions.

The weekend started with a celebration, with Fabian Coulthard’s 35th birthday, on Friday. He worked through a comprehensive testing program with his engineering team across the day, focusing largely on race pace. He set his fastest lap of the day very late in the session, after the chequered flag had been waved, to end the day second.

McLaughlin opened Friday with the fastest time in practice one, showing good pace in race trim on old tyres. Like Coulthard, he and his crew turned their focus to qualifying pace in the second session. Unfortunately, McLaughlin didn’t get to the start line before the chequered flag came out, so didn’t get a flying lap in at the end of the session, ending the day 10th.

Saturday started well for both drivers, with McLaughlin ending the final session second and Fabian third. Qualifying didn’t go to plan for Coulthard, and whilst only three-tenths back from pole, he would start the race from 14th on the grid. McLaughlin took his 10th pole position of 2017, before going on to take his sixth victory of the year. The team created a sensational strategy for the race and Fabian executed a stellar recovery drive to finish the 120km race in sixth.

Coulthard had a much better run on Sunday, with a strong lap in qualifying that saw him start the race from fourth on the grid. McLaughlin took his 11th pole of 2017 with a record setting effort.

In the race Coulthard got a good start and drove past teammate McLaughlin, racing in third position until the first pit stops. Following the stops, he rejoined fifth and got up to fourth after passing Nick Percat in the last stint. Following a late race re-start he was chased down and passed by Shane van Gisbergen on fresher tyres, and finished the race fifth. He remains third in the championship heading to the next event in Sydney in three weeks.

McLaughlin had a slow start to the race, and slipped into fourth position for the first stint of the race behind teammate Coulthard. He exited from his first pitstop into third place, which he held until late in the second stint when he passed Whincup to take second position. He tried to go with eventual winner, Mostert, after the late race restart, but was then forced to defend against a charging van Gisbergen to finish second.

McLaughlin extended his Championship lead to 129 points, with only one sprint event remaining before the start of the PIRTEK Enduro Cup.

The team continues to sit at the top of the Teams’ Championship standings, 192 points in front of Triple Eight. The next event is the Sydney Motorsport Park SuperSprint across the weekend of August 18-20.