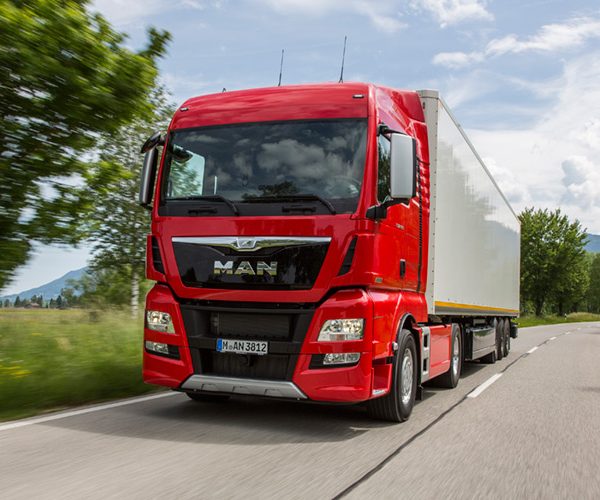 Class leading engine efficiency, new driveline, the latest German technology and low running costs herald the introduction of the all-new MAN TGX-D38, due to go on sale in late 2015.

The new flagship of the MAN fleet, the TGX-D38 has been optimised for Australian conditions with factory supported local R&D input and is the first model from the renowned European brand that meets the demands of long distance transportation in B-Double and heavy-duty applications.

Making its Australian debut at the 2015 Brisbane Truck Show, just seven months after its world premiere at the IAA Trade Fair in Hanover, Germany, the MAN TGX-D38 is guaranteed to enthral attendees with its striking looks that set it apart from the pack.

Exterior highlights include the platinum matte finish on the side mirrors and radiator cover, gloss black fascia panel, large chrome D38 lettering on the driver and passenger door and the engine power output (560 hp) on the door badges, that visually convey the power output of the truck.

MAN’s focus with the TGX-D38 was to provide a truck offering the highest levels of driving dynamics and performance with low ownership costs.

“European trucks are designed and built to relentlessly ply long distances across many terrains in all weather conditions. We believe these qualities stand us in good stead for operators requiring B-Double and heavy-duty applications in Australia.”

Featuring a number of technical firsts, the MAN engine produces 560 hp (411 kW) and 1991 ft-lb (2700 Nm). The 15.2 litre, six-cylinder, SOHC, common rail injected, twin turbocharged powerplant, designated D3876, is an evolution of the D20/D26 motors that have proven themselves over millions of kilometres.

MAN has developed a ‘Top Down’ system that pumps coolant from engine top to bottom, minimising cylinder head stress, while protecting the injectors and exhaust valves.

Domed valves are another innovation. To prevent deforming, additional convex shaping strengthens the valve disk and increases the service life of the valve seating ring.

Cable routing is encased in foam-filled harnesses to reduce material fatiguing vibrations, another first for MAN.

The 560 hp (411 kW) Euro 6 compliant engine consumes up to 3 percent less fuel than an equivalent 540 hp Euro 5 engine, due to its third generation, high-pressure common rail fuel system, that injects fuel into the cylinders at up to 2500 bar, resulting in finer atomisation and lower particulate levels.

Another engine characteristic is the lower RPM torque delivery from 930 to 1350 rpm and high starting dynamics, achieved via the two-stage sequential induction turbocharging. The high-pressure turbo cuts in at low engine revs with assistance from the low-pressure turbo as revs increase. After cooling is achieved by two air-to-water intercoolers.

An engine-powered, two-cylinder air compressor is fitted and is designed to disengage whenever the charging of the air system is not needed, increasing operating efficiency by up to 90 percent compared to a constantly running compressor.

The D3876 is one of the lightest engines in its class, weighing 160 kgs less than its V8 predecessor, thanks to its aluminium flywheel housing, lightweight Compacted Graphite Iron (CGI) engine block and cylinder head, plastic sump and rocker cover.

The comprehensive use of lightweight, high strength materials throughout has resulted in tare weight advantages against its competitors.

Operators will reap the benefits of lower running costs thanks to the commonality of parts with the D20/D26 engines currently in use throughout Australia and oil drain intervals of up to 100,000 kms.

In addition to the all-new engine, the MAN TGX-D38 introduces an advanced transmission and GPS-based cruise control, designed to maximise performance and fuel efficiency while lowering operating costs.

Idle Speed mode enables comfortable driving at idling speed and allows the driver to manoeuvre the truck with great precision, making it ideal for working in the tight confines of a transport terminal. It also makes stop-start driving on congested roads easier and more comfortable.

Once underway, the truck moves at a low idling speed of around 600 rpm without the need to press the accelerator. If there is insufficient engine torque at idling speed, it shifts down a gear and for safety, the clutch disengages the moment the driver presses the brake pedal.

With Speed-Shifting mode, the MAN TipMatic® 2 upshifts faster between the three highest gears 10, 11 and 12 and rapidly downshifts on inclines to maintain momentum and use less fuel.

The Efficient-Roll mode saves fuel by automatically shifting into neutral without engine braking, on slight declines on highways and country roads. This allows the truck to travel with the additional momentum gained from the decline. However, if the truck speed exceeds the specified or permitted speed, the MAN TipMatic® 2 automatically re-engages gear. (Not available in conjunction with GPS-Controlled Cruise Control).

Another key technology of the TGX-D38 is the MAN EfficientCruise® GPS-controlled cruise control, that utilises saved topographical map data to detect gradients on the route. Following route information input from the driver the MAN EfficientCruise® calculates a speed for optimising fuel consumption. For example, truck speed increases in a pre-determined manner before a hill and then coasts over the hilltop at reduced speed, resulting in greater efficiencies over the journey.

The versatility of the MAN TGX-D38 gives customers the choice of a leaf spring/air suspension combination or full air suspension.

It wowed the crowds at its world premiere at the IAA Commercial Vehicle show in Hannover last September and the MAN TGX-D38 is set to do the same at the 2015 Brisbane Truck Show.

Cabin entry steps are concealed within the door cavities for a sleeker profile, and the sizeable exterior mirrors are fitted with aero covers. The door handles are low-set and the grab rail assists with easy entry into the spacious cabin.

There are easy-to-read analogue instruments and all switches and controls are within easy reach of the driver. Between the two seats that are trimmed in soft durable material, is the broad flat centre console with cup holders. Throughout the cabin are loads of storage cubbies large and small.

The sleeper area has additional storage options, a drop down bed, plus a small pop up roof set within the main roof for ventilation.

The MAN TGX-D38 is due for release in late 2015 and pricing will be announced closer to the on-sale date.