Hi-Clearance MAN ticks all the boxes

MAN to display wide model range at ITTES in Melbourne 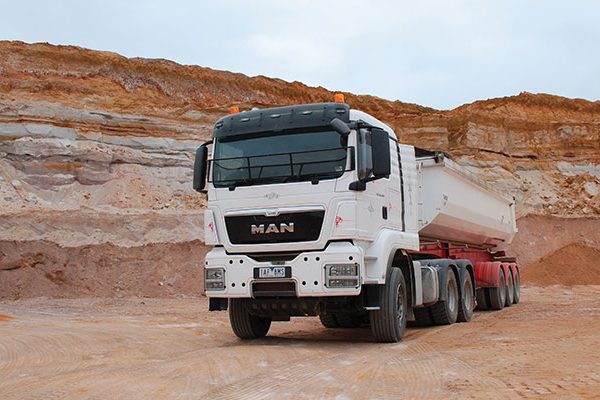 Ross Chapman Cartage & Earthmoving Contractors is a family owned company that has been operating since 1952. As the name implies, the company is involved in road transport and earthmoving primarily around the Gippsland area in Victoria.

When current owner and manager Nick Chapman was looking for a new truck to fulfil an important and demanding role he had a long list of requirements.

“The specific requirement was for a truck that could cope with high engine hours and low kilometres in a very demanding application. To that end it had to have high clearance, but I was also after features such as no grease points, auto transmission, downward facing exhaust, and it had to be Euro 5 with Adblue. So I had a very clear idea of what I was looking for,” Nick said.

Following a chat with a friend who spoke in glowing terms about the MAN product, he decided to check them out for himself and visited Patterson Cheney Trucks Dandenong and viewed a TGS 26.480 6x4 Hi- Clearance model.

After checking out all the specs, a test drive in a 540 model was all that was needed to convince Nick this was the truck for him and an order was immediately placed. The truck was delivered to Nick in December 2013.

“Quite simply the MAN ticked all the boxes – I wasn’t intending to buy an MAN but I’m so glad I did - I’m super impressed with it. It’s doing everything I need it to do and then some,” Nick went onto say

Like many new MAN owners, Nick is also discovering a major key benefit of the vehicle - the outstanding fuel efficiency. “In comparison to the other European truck that we had, the MAN is recording substantially better fuel economy figures – a figure that will only get better over time,” Nick enthused.

This positive experience with his first MAN means Nick will certainly be looking at additional MAN’s for other applications. ”No question about it, I would certainly buy another MAN in the future,” Nick summed up.