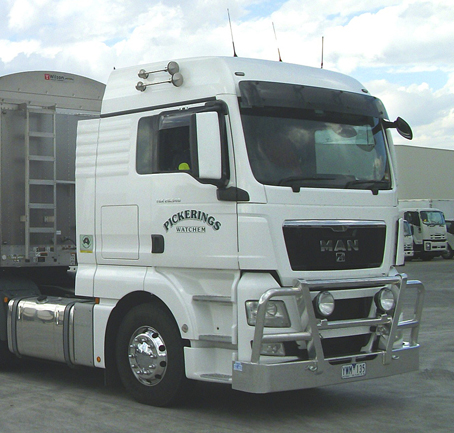 MAN’s powerful yet economical TGX 540 is proving its mettle as an ideal B-Double prime mover with a range of operators across Australia.

One such operator, Pickering’s Bulk Haulage, is using their TGX as a B-Double bulk grain carrier, gaining exceptionally impressive results and feedback so far.

Pickerings Bulk Haulage, based in Watchem, Victoria was established by Graham Pickering in 1974 and was initially involved with livestock transport for the first seventeen years of operation until moving into bulk tipper work in 1989.

The company now has five trucks, 4 B-Doubles and a quad dog covering the east coast of Australia, both intra and inter-state, carting predominantly potatoes and bulk grain.

The TGX 540 sleeper cab was purchased in April 2012 from Westar Truck Centre in Derrimut and in Mr Pickering’s words has all the bells and whistles fitted. It pulls a B-Double belly dumper trailer rated for a 47.5 tonne payload in Victoria, with an all up weight of 68.5 tonnes.

“The power and torque is simply amazing considering the heavy load we pull, you don’t notice any slowing down regardless of the terrain,” Mr Pickering said.

After 115,000 trouble free kilometres Mr Pickering is exceedingly pleased with the MAN, particularly its fuel economy. “We are averaging 1.9 km/l, running mostly VIC intra-state, one way empty, which is a great result – better than any other truck in the fleet,” Mr Pickering went on to say.

A key attraction of the MAN relates to its long service intervals of 60,000 km. In addition, the high number of sealed-for-life components in the MAN is also proving a high end benefit as it translates to lower servicing costs.

“We put it in for its first 60,000 km service at Westar and aside from the required oil change nothing needed to be done, not one thing. That’s remarkable from my perspective,” said Mr Pickering.

Drivers are also hugely enthusiastic about driving the TGX. “My drivers just love the MAN. One of my older drivers tells me that he can get out of the TGX after 1,000 kms and walk normally – that’s something he hasn’t been able to do before!” Mr Pickering added.

“The TGX sleeper cab has one of the largest storage areas and bed sizes of any European cab and this was another big plus for us,” Mr Pickering said.

The absence of a conventional stick shift in favour of an auto also comes in for praise.

The MAN auto switch is located conveniently close to all other driver function controls, and includes the ‘M’ setting which provides precise low speed manoeuvring whilst a toggle lever on the steering column allows shifting from automatic to manual mode easy.

As with all MAN’s, the TGX features the latest in active and passive safety features including a built-in crumple zone, the latest cabin ergonomics, disc brakes all round, Anti Lock Braking system (ABS) and a state of the art Electronic Brakeforce System (EBS) which ensures a shorter emergency stopping distance.

“I cannot fault our MAN TGX – with its combination of high power, low tare weight, excellent fuel economy and cab comfort the MAN really has ticked all the boxes – I’m really pleased with it,” Mr Pickering added.

Graham also runs a fertiliser spreading business and given his experience with his TGX it’s no surprise that he’s just purchased a new MAN 18.340 4x4 which he describes as ‘brilliant’.