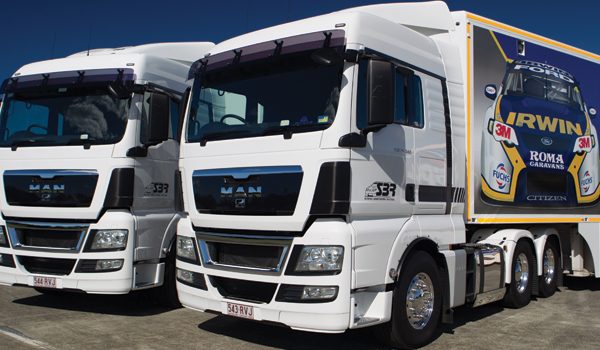 Two prime movers supplied by MAN Automotive Imports will join the Greatest Show on Wheels in 2012 with the company signing a multi-year deal with V8 Supercars Team, Stone Brothers Racing (SBR).Each year SBR has the enormous logistical task of transporting over 100 tonnes of cars and equipment to race events around Australia and the world.

SBR Principal Ross Stone said having MAN trucks supply domestic transport for the team means reliability and peace of mind.
It requires two fully loaded B-doubles for us to transport our three Championship Series cars and our Dunlop Series car to each V8 event.
Travelling 60,000km every year can, at times, be a challenging task but its a no worries factor when dealing with MAN.

We now have two reliable MAN trucks so we know that we will be at races on time and with no problems, said Mr Stone.
MANs General Manager Marketing Don Hanson said MAN is delighted with the new sponsorship deal and is proud to be associated with SBR.
MAN has a long history of supporting motorsport worldwide, and we are very pleased with the new relationship with Stone Brothers Racing. As with SBR, MAN strives for engineering excellence, and we look forward to the 2012 V8 Supercars season, said Mr Hanson.

Mr Stone said that in recent years the trucks have become a very big part of the V8 Supercars race experience.
Many fans attending the V8 races come to not only see the cars but their team transporters.

A feature activity in the lead up to many of the V8 events, including Bathurst and Darwin, is the Truck Parade.

Its a great spectacle and this year we are looking forward to seeing MAN head up SBR in the parades, said Mr Stone.

SBRs new MAN Trucks will be on show this week at the Qantas Australian Grand Prix, 15 18 March.